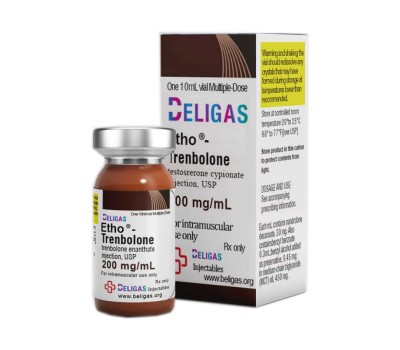 Etho-Trenbolone – injectable steroid that is used mainly in bodybuilding and weightlifting to achieve maximum growth of compacted muscle mass and a significant increase in power capacity. Etho-Trenbolone ester is characterized by a long period of exposure into the body (about six weeks). Etho-Trenbolone Effects signific... Read more →

Etho-Trenbolone – injectable steroid that is used mainly in bodybuilding and weightlifting to achieve maximum growth of compacted muscle mass and a significant increase in power capacity.

Etho-Trenbolone ester is characterized by a long period of exposure into the body (about six weeks).

significant increase in muscle mass (average 10 kg per 8 weeks);
increasing the degree of endurance and power performance;
200% increase in the level of insulin-like growth factor stimulation and hyperplasia of the muscle;
fat burning effect (including the influence due to the release of growth hormone);
lowering cortisol levels (a hormone which facilitates the destruction of proteins, increased fat accumulation and glucose).

How to Use Etho-Trenbolone: Dosage, Cycle, PCT

To create a cycle for Etho-Trenbolone, which also would be effective and safe for the body, stick to a few rules:

Do not exceed the dosage of the drug and duration of the cycle (the optimal dose of Etho-Trenbolone per week – 300 mg, cycle length – 6-8 weeks).
Always start with a minimum rate of injection to fix the body’s response to anabolic effects.
Take Gonadotropins, if the steroid cycle is designed for 5 weeks and more.
Do not neglect the power of sports complex and a special diet for weight gain.
Always consult a doctor before starting the cycle.

Etho-Trenbolone, to gain muscle mass, is often taken solo, because of its efficiency. In professional cycles at a dosage of 250 mg per week, can be stacked with Testosterone Enanthate, but this combination is only valid for the experienced athletes, and after a medical advice.

For drying period one can buy Winstrol, or Anavar without anti-estrogens, using half of the dosage.

As PCT on Trenbolone cycle is used Toremifene or Clomid.

After analyzing published on Etho-Trenbolone reviews, it is easy to draw a conclusion about the quality of weight and severity of the effect: more than 90% of athletes and bodybuilders were satisfied with the results of the cycle. The absence of the phenomenon of rollback and flavoring also played a significant role in relation of athletes with this steroid.

Warnings: Keep out of reach of children. For adults only. 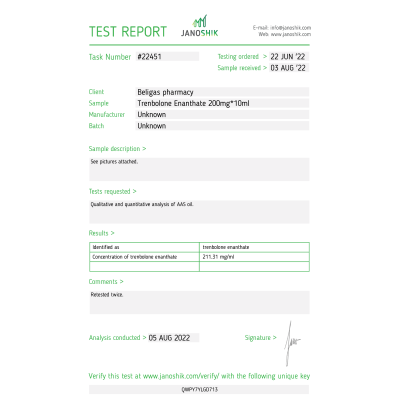